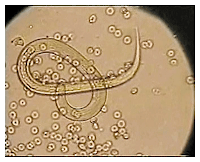 A 46-year-old man with Raynaud's disease who emigrated from Cambodia 30 years ago presented with a 2-month history of myalgias, exertional dyspnea, and an elevated level of creatine kinase. An extensive evaluation was notable for the ground-glass infiltrates detected in the lower lobes on a computed tomographic scan of the thorax. Serologic tests and bronchoalveolar lavage were unrevealing. A specimen from a muscle biopsy showed necrotizing myopathy. Empirical therapy with oral corticosteroids was begun for treatment of an inflammatory condition that was presumed to be noninfectious. Four weeks after therapy was initiated, the muscle weakness and dyspnea were worse and there was progression of the pulmonary infiltrates. While the patient was waiting to undergo an open-lung biopsy, pulmonary hemorrhage, hypoxemic respiratory failure, and fulminant septic shock with Escherichia coli occurred. Moreover many worms were observed in an endotracheal aspirate (see the worm, with red blood cells in video).

Identify the worm and suggest a possible reason for the migration of worms from the gastrointestinal tract to lungs.