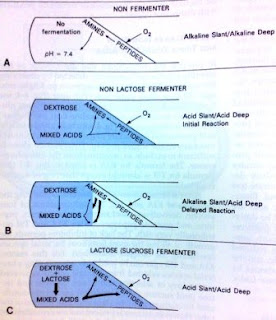 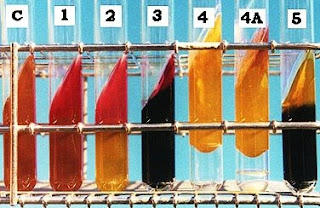 
Triple sugar iron agar is an interesting & important diagnostic medium most widely used to identify the ability of organism to produce acid from glucose, lactose/sucrose, gas and hydrogen sulphide (H2S); but the principle is little bit difficult to understand.
Major ingredients of TSI:
Glucose – 0.1%
Lactose – 1%
Sucrose – 1% (absent in Kligler Iron agar i.e., KIA)
Peptone (Nitrogen source)
Sodium thiosulphate (Sulfur source)
Ferrous sulfate (H2S indicator)
pH – 7.4
pH indictor – Phenol red (orange at neutral pH)
Turn into pink at alkaline pH & turn into yellow at acidic pH.
TSI agar (see Control tube in Image 2):
Butt – stab inoculation – organisms grow under anaerobic condition – slow growth
Slant – streak inoculation – aerobic metabolism – rapid growth
PRINCIPLE:
TSI Butt:
All fermentative organisms ferment acid from glucose. Due to the slower metabolism organisms in the butt region gradually utilize the glucose (only 0.1% avilable) and produce acids. Since the butt is under anaerobic condition there is no oxidative metabolism takes place. So there is no alkaline end product even after the depletion of glucose.
TSI Slant:
In slant organism involve in rapid metabolism and produce acid form glucose; since it is very low in quantity it will get exhausted soon. The next carbon source is lactose; If the organism is lactose fermenter produce acid using lactose, otherwise it will start utilizing peptone (oxidative metabolism) in the medium and produce alkaline end products which will change pH indicator to pink color.
Mechanism of H2S production:
The ability of organism to liberate sulfur from sodium thiosulfate in the form of H2S is an important characteristic for their identification. H2S is colorless, so the medium is incorporated with H2S indicator (Ferrous sulfate).
Sulfur Indole Motility (SIM) medium is more sensitive for the detection of H2S than KIA, presumably because of lack of carbohydrates to suppress H2S formation, and use of peptonized iron as the indicator. On the other hand, KIA is more sensitive than TSI because sucrose is believed to suppress the enzyme mechanisms responsible for H2S production.
Reactions on TSI:
Alkaline slant/Alkaline butt (K/K): No Carbohydrate fermentation. This is characteristic of non-fermentative bacteria. Eg. Pseudomonas aeruginosa. (A in image I & 1 in image II)
Alkaline slant/ Acid butt (K/A): Glucose fermented; lactose and sucrose were not fermented. This is characteristic of non-lactose-fermenting (NLF) bacteria. Eg. Shigella sp. (B in image I & 2 in image II)
Alkaline slant/ Acid (black) butt (K/A/H2S): Glucose fermented; lactose/sucrose not fermented, hudrogen sulfide produced. This is characteristic of non-lactose-fermenting, hydrogen sulfide-producing bacteria. Eg. Salmonella sp, Citrobacter sp, Proteus sp. (3 in image II)
Acid slant/ Acid butt (A/A): Glucose and lactose (or sucrose) fermented. This is characteristic of lactose-fermenting coliforms, such as Escherichia coli and the Klebsiella-Enterobacter species. (C in image I & 4 in image II)
Many microbiologists prefer TSI over KIA because the addition of sucrose to the formula helps screen for Salmonella and Shigella species, because neither of these (except rare strains) metabolizes either lactose or sucrose. Therefore, any acid reaction of TSI indicates that either lactose, sucrose or both have been fermented, excluding Salmonella and Shigella.
Note:
· Virbio cholerae and Yersinia enterocolitica ferments sucrose, but not lactose; thus, on TSI the reaction will be A/A but on KIA, the reaction will be K/A.
· 4A of image II is showing slight alkaline reaction at slant. It is due to prolonged incubation i.e., 48 hours. Here the lactose is also depleted and then alkaline metabolism initiated.
· 5 of image II is a rare feature; it may be characterized by H2S producing E. coli or lactose fermenting Salmonella.
Share this article :
Posted by Sekar

It's well and good sir, but i need information about gas production in TSI.