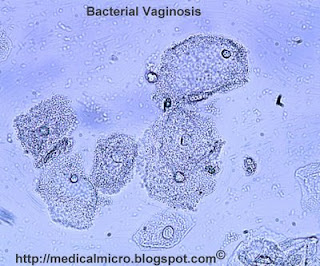 Bacterial vaginosis (BV or vaginal bacteriosis or anaerobic vaginosis or non-specific vaginosis) is the most common cause of vaginal infection. It is not a STD (sexually transmitted disease). BV is due to an imbalance of normal vaginal flora, and should not be confused with yeast infection (candidiasis, thrush), or infection with Trichomonas vaginalis (trichomoniasis) which are not caused by bacteria.
A healthy vagina normally contains many microorganisms; some of the common ones are Lactobacillus crispatus and Lactobacillus jensenii. (Note: Lactobacillus acidophilus is not having a protective role in vaginal flora.)
Cases of bacterial vaginosis are more likely to occur in sexually active women between the ages of 15 and 44, especially after contact with a new partner. BV is twice as common as thrush and it is estimated that 1 in 3 women will develop the condition in their lives.

The most common symptom of BV is an abnormal vaginal discharge (especially after sex) with an unpleasant fishy smell. While some women do not experience symptoms, many women experience intense itching, swelling and irritation (often misdiagnosed as a yeast infection), as well as stomach pains, which feel like severe cramps.

The microorganisms involved in BV are,
· Gardnerella vaginalis
· Mobiluncus
· Bacteroides and
· Mycoplasma
A change in normal bacterial flora including the reduction of lactobacillus, which may be due to the use of antibiotics or pH imbalance, allows more resistant bacteria to multiply. In turn these produce toxins which affect the body's natural defenses and make re-colonization of normal flora more difficult.
A. Mobiluncus curtisii & Mobiluncus mulieris
-Anaerobic
-Gram variable
-Curved bacilli
- Motile
Fastidious & slow-growing
COI – Negative (Catalase, Oxidase, Indole)
Colorless, clear colonies, 2 mm at 5 days incubation

-Mixed bacterial aetiology
-No signs of inflammation in the vaginal mucosa
-The way in which the bacteria interact to produce vaginosis is unclear
-Vaginal pH usually kept low (4.3) due to acid production by commensal
-Bacteroides spp. produce amines, which causes a rise in vaginal pH (6 - 6.5)

-This rise in pH to 6 – 6.5 favors the growth of Mobiluncus mulieris & M. curtisi

At least three of the four criteria should be present for a diagnosis.
An alternative is to use a Gram stained vaginal smear, with the Hay/Ison criteria or Nugent criteria.

The Hay/Ison criteria are defined as follows:

At least morphotypes from 10 fields has to be counted and an average/oil immersion field must be calculated. Then the score has been given as in this table. 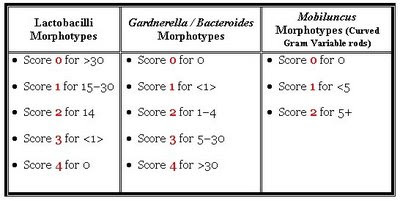