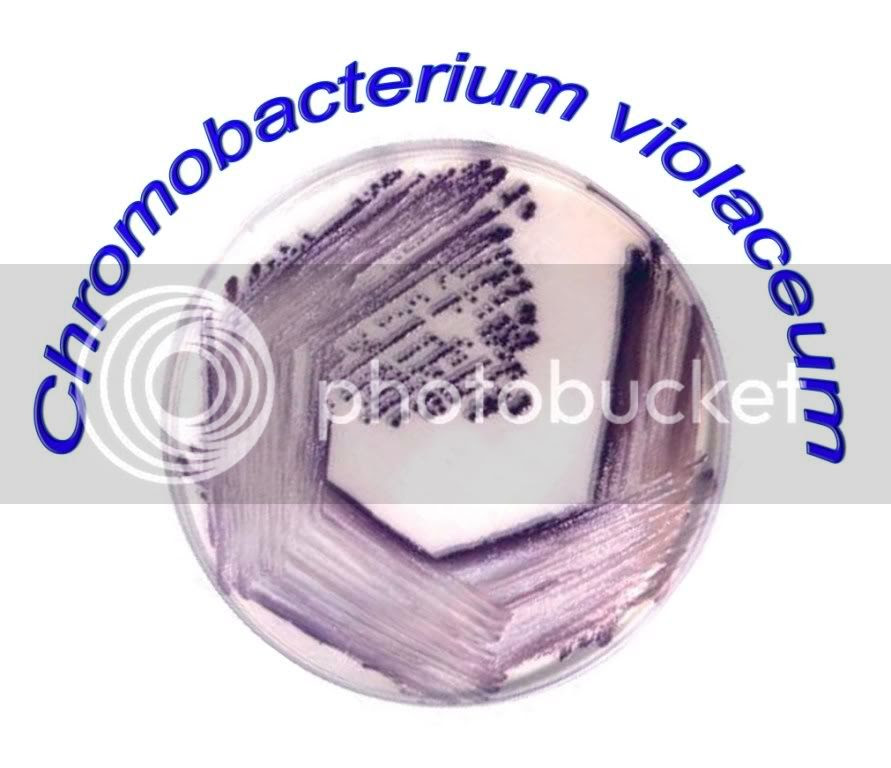 Chromobacterium violaceum are gram negative coccobacilli, motile with single flagellum and are frequently found in soil and water.
They grow readily on nutrient agar, producing distinctive smooth low convex colonies with a dark violet metallic sheen  The biochemical characteristics of this bacterium are similar to that of B.pseudomallei but C.violaceum produce purple pigment called “violacein” which may be useful for the treatment of colon and other cancers
C. violaceum rarely infects humans, but when it does it causes skin lesions, sepsis, liver abscesses and that may be fatal.
C. violaceum produces a number of natural antibiotics (used as an antimicrobial agent, a fungicide, an insecticide and an anti-cancer agent)
Ø      Aztreonamis a monobactam antibiotic that is active against Gram negative bacteria and Pseudomonas aeruginosa. It is marketed as Azactam.
Ø      Violacein is active against amoebae and trypanosomes
Ø       Aerocyanidine is active against Gram positive organisms.
Ø       Aerocavin is active against Gram-positive and Gram negative organisms.
Ø      Genes for phenazine synthesis has antitumour therapy
Other uses:
Ø      Hemolysins useful as potential anticoagulants
Ø      Bicontrol agents against insects (potato bettle), fungi and nematodes (proteins)
Ø      The bacteria produce cyanide which has been useful in the harvesting of gold
Ø      These bacteria can produce polyesters which can be used to make polyhdroxyalkanoates (PHA’s) which are an alternative to plastics make by petrochemicals
- Ms. T. Sweetha
Share this article :
Posted by Dr Vignesh Ram