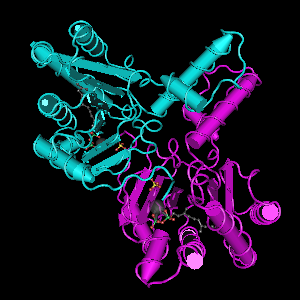 Infections by methicillin-resistant Staphylococcus aureus (MRSA), being very hard to treat, remain a challenge to healthcare providers worldwide.  Bacterial cell wall synthesis is usually targeted by most classes of antibiotics, since cell wall is essential for the bacteria to survive and these cell wall structures are absent in the hosts (humans). Undecaprenyl diphosphate synthase (UPPS), an enzyme required for early-stage cell wall synthesis is one of the potential targets for drug development and a few studies have already identified compounds inhibiting UPPS.

In a mission to develop newer UPPS inhibitors Dr. Eric Oldfield and colleagues of the University of Illinois and Andrew McCammon of the University of California, San Diego,  zeroed in on diverse compounds with activity against UPPS using computer screening programs and then analyzed the 3D structures of compounds bound to enzyme using X-ray crystallography.

Of the 10 compounds identified, the scientists went on to investigate the strongest of the inhibitors and in vitro laboratory investigations revealed that the stronger compounds were active against both Gram negative Escherichia coli and MRSA.  One of the  potent compounds that was found to improve the efficiency of methicillin was tested on a mice artificially infected with MRSA and 20 out of 20 mice survived, while untreated mice did not.  Thus, further research in this direction might lead to effective antibacterial drugs to tackle the ever-increasing threat of infections by resistant bacteria.