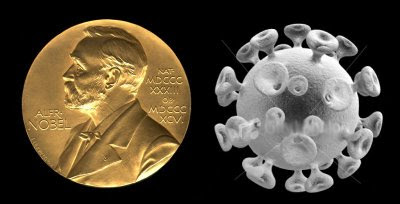 Three European scientists were awarded the prestigious Nobel prize for the discovery of 'Bad news wrapped in protein'  a.k.a. viruses causing two devastating illnesses, namely AIDS and cervical cancer.
Harald zur Hausen went against the prevailing concepts during the 70s and postulated that oncogenic human papilloma virus (HPV) caused cervical cancer, the second most common cancer among women. He realized that HPV-DNA could exist in a non-productive state in the tumours, and should be detectable by specific searches for viral DNA. He found HPV to be a heterogeneous family of viruses. Only some HPV types cause cancer. His discovery has led to characterization of the natural history of HPV infection, an understanding of mechanisms of HPV-induced carcinogenesis and the development of prophylactic vaccines against HPV acquisition.
Françoise Barré-Sinoussi and Luc Montagnier discovered human immunodeficiency virus (HIV). Virus  was identified in lymphocytes from patients with enlarged lymph nodes in early stages of acquired immunodeficiency, and in blood from patients with late stage disease. They characterized this retrovirus as the first known human lentivirus based on its morphological, biochemical and immunological properties. . The discovery was one prerequisite for the current understanding of the biology of the disease and its antiretroviral treatment.The significance of their achievements should be viewed in the context of a global ubiquitous epidemic affecting close to 1% of the population.
Never before has science and medicine been so quick to discover, identify the origin and provide treatment for a new disease entity.
Share this article :
Posted by Dr Vignesh Ram