‘Superantigens’ – (coined by Kapplar and Marrack in 1990) are a class of antigens which cause non-specific activation of T-cells resulting in polyclonal T cell activation and massive cytokine release. They are produced by pathogenic microorganisms, including viruses, mycoplasma, and bacteria as a defense mechanism against the immune system. Compared to a normal antigen-induced T-cell response where 0.001 to 0.0001% of the body’s T-cells are activated, these Superantigens are capable of activating up to 20% of the body’s T-cells. 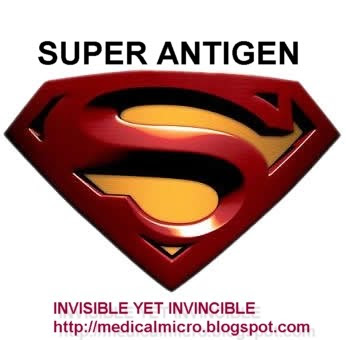 1. They are not processed into peptides and associate with the MHC Class II molecules outside the polymorphic peptide-binding groove.
2. Although they require MHC Class II molecules for presentation, the T-cell response is not MHC-restricted and superantigens can be presented across species barriers.
3. Superantigens interact with T-cell receptor over the Vβ segment only, regardless of third hyper variable regions and Vα expression.
By the action of superantigens, the T-cells are stimulated and produce excess amounts of cytokine resulting in cytokine-mediated suppression of T-cells and deletion of the activated cells as the body returns to homeostasis. If the initial inflammation is survived, the host cells become anergic or are deleted, resulting in a severely compromised immune system.
Superantigen stimulation of antigen presenting cells and T-cells elicits mainly inflammatory responses focused on the action of Th1 T-helper cells. Some of the major products are IL-1, IL-2, IL-6, TNF-α, gamma interferon (IFN-γ), macrophage inflammatory protein 1α (MIP-1α), MIP-1β, and monocyte chemoattractant protein 1 (MCP-1). This excessive uncoordinated release of cytokines, (especially TNF-α), overloads the body and results in to rashes, fever, and can lead to multi-organ failure, coma and death.
They are also known to play a role in allergy and autoimmune mechanisms. Superantigens can be broadly classified as exogenous – comprising bacterial toxins and endogenous -comprising virally encoded superantigens. Endogenous superantigens have not been identified so far in humans.

1. HIV – Clonal deletion, anergy, apoptosis
2. Rabies
3. Epstein-Barr virus
4. Cytomegalo virus
Treatment of Superantigen mediated diseases:
Depending on the toxin, supportive therapy and antibiotics are administered. Pooled intravenous immunoglobulins are used to treat TSS.
Superantigens as therapeutic agents:
Superantigens have been implicated in the treatment of cancers and more studies are directed to explore further applications of superantigens in therapeutics.
Share this article :
Posted by Dr Vignesh Ram